About a year ago I partnered up with Palladium Books to create digital iOS stickers based on their Rifts Role-Playing Game.

While they were very well received by those that bought them (5⭐star reviews, yay!); unfortunately not enough people purchased them to cover the costs of development (hence lack of updates).

Sadly, at the end of this week (Feb 8th) my contract with Apple will be coming to an end and the stickers will no longer be available for purchase. Thankfully those that have already purchased the stickers will not lose them and will be able to continue to use them indefinitely.

Will Palladium and I revisit them in the future? As much as I’d like to (I have a lot more characters waiting to get added) it’s hard to say. So, if you were thinking of getting them, grab them now, while you can! And a HUGE thanks to everyone that picked them up, I hope you enjoyed them as much as I had fun making them! 😊

Last year at Palladium Book's Open House, I announced plans to create an animated sticker pack for iOS iMessenger featuring characters from the Rifts® universe (and somehow forgot to post the announcement here)!  After a long wait for legal paperwork, and two additional months for final development, I'm excited to write that the digital stickers are now FINALLY live on iPhones and iPads worldwide!!

Are you ready to level up your iMessage texts?
From the pages of the Rifts® tabletop role-playing game, come adorable, fully-animated stickers of your favourite iconic characters!

Created by yours truly under official license from Palladium Books®, Inc. 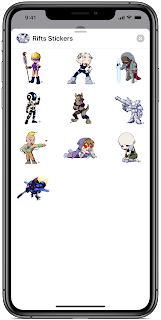 Note: If all goes well with iOS sales, we will be doing our best to look into finding a way to bring these to Android users as well, so tell all your iPhone friends to buy them now! ;)

On April 19-22, Palladium Books will be hosting their quasi-annual Open House convention.

For limited time, I'll be taking character sketch commissions for those that will be attending the Palladium Open House that you can pick up at the event!

But, you say part of the fun is getting to watch the artist draw...
Worry not, every Monday and Friday evenings (EST), up until the convention, I'll be on Twitch, live streaming your art commissions!
Come and say "Hi!"
Posted by Apollo Okamura No comments:

I didn't have a chance to participate in Inktober this year, but I did get to do some digital doodles for fun while I was finishing up my demo reel. Nothing too fancy, but I hope you like them. :)

Over the years there's been a few times where I've been asked about a demo reel. Problem was, I had primarily worked as an instructor, rather than producing content. That's still the case; but thankfully, while teaching, I'm usually drawing more than just stick figures. So, I've gathered up some of that content and compiled it all together into a nice little demo reel. Some of it you may recognize from earlier posts, and others may be newer; either way, I hope you enjoy it!

For various reasons, I've taken down my old art gallery.
Apologies to all those that enjoyed perusing my older artwork. You can still check out all the pictures I've posted here, on my blog, and I will be posting more for sure; and, if all goes well, I may even consider creating another gallery of sorts. Will have to wait and see what the next month or two has in store.

For those that follow my blog, you might recall me mentioning back problems, causing paralytic issues with my right leg, and then later problems with my drawing arm. While I’ve had a bit of a reprieve, it seems neither have actually gone away. Although I had an operation in my lower back repairing the severe sciatic condition; for a while now, I have been having recurring symptoms similar to what I had prior to my surgery. Likewise, the pain to my arm has mostly been held off by medication; but the pinched nerve causing it, has actually been getting worse.
Unfortunately, I’ve been told that another operation on my back would be considered extremely dangerous.

The wear on my body hasn't gone unnoticeable either. I've lost over twenty pounds in just the last few months alone. I haven't been this weight since high school! I wish I could say it was due to proper diet, sleep, and hard-core work-outs; but if anything it's been the opposite.

Thankfully, none of the pain has been anywhere near as debilitating as it was before. I’m doing everything I can: continuing to take medication to stave off its effects, doing traction therapy to help the spine and neck stay aligned, light exercise to keep all the muscles surrounding those bones nice and strong, and of course, I’m seeing doctors regularly to keep an eye on things.

I’ll be having another major scan in the upcoming months, and will keep you all updated as things progress. In the meantime, I'll be continuing to draw as long as I can hold a pencil. :)
Posted by Apollo Okamura No comments:

On May 27-29th, I had the opportunity to join Palladium Books at their gaming table at Anime North, a yearly convention held in the Toronto Congress Centre. It was great seeing the Palladium gang after having missed their Open House last year, and it was my first time at Anime North. While there, I even had the pleasure of bumping into some other old familiar faces who I haven't gotten to see in quite some time. Overall, Anime North was a fun show with tons of stuff there for any anime or manga enthusiast.

While not the usual crowd I'm used to compared to GenCon or Origins, it was still cool to see a few Palladium and Robotech fans show up to the booth. Though, because of my injuries (which are doing much better these days), I didn't have much new art to sell; but that didn't stop me from drawing character/fan-art sketches for visitors!

Here's a few I grabbed photos of:


I decided to throw on some quick colour on the Tracer sketch, just for fun:

Over the last few months I've been on a huge WAKFU kick, and thought I'd draw up a piece of fan-art based on its main characters:

But what is WAKFU?

During my travels, teaching animation, WAKFU was the single most asked about animated series, the world over. Naturally, I set out to find out as much as I could, and I'm so glad I did.

WAKFU is a heroic fantasy animated series that follows the quest of an orphan, Yugo, who sets out to discover his origins. It was created by France-based studio Ankama, inspired by their turn-based MMORPGs (also created in-house) called Dofus, and it's sequel, Wakfu.

What makes WAKFU stand out from other animation is that it's heavily made using a cut-out style (characters are like puppets), but the movements in the series are beautifully fluid, and doesn't shy away from strong dynamic poses and camera shots, not normally associated with cut-out style animation. What makes it even more impressive is that it was also created using Adobe's Animate CC (aka: Flash).

Former students of mine have all heard how I've long since parted ways from Flash's use of symbols, and its traditional animator un-friendly interface. Though it has gotten much, much better, proficient Flash users still get a lot of my respect for working with the software, and Ankama ranks the highest up there.

Ankama's secret though is that the animation for WAKFU is actually created traditionally, on paper, first, and then cleaned up in Flash, using cut-out where, and when possible.

For some of the more complicated shots, creatures, and contraptions, Ankama even utilizes 3D software, helping them to push angles even more.

Suffice it to say, that a lot of hard work has gone into creating the animated series, and it shows, in spades. Not only is the animation amazing, but the story and world-building are also a delight, and I highly recommend it for anyone that hasn't seen it.

Mind you, that's the most upsetting thing, as it's not widely available here, in North America. Thankfully, Netflix does have both Seasons 1 and 2 online, as well as the movie, La Quête des Six Dofus Eliatropes (don't worry, it's in English).

And if you still can't get enough, might I also recommend their board game, Krosmaster Arena (also available as a PC game). It's a turn-based skirmish miniatures game that battles it out using similar mechanics to their video games. And while the game itself is a blast, the physical miniatures you play with are irresistible! (Check out a live Table-Top game play of Krosmaster Arena here).

So, this has been another odd year for me...

A good chunk of 2015 I've spent dealing with the pinched nerve causing problems with my drawing arm. Needless to say I haven't done a ton of drawing or freelance art.

Despite that, I was able to actually finish my animation video tutorials and likewise, make them available to the public on udemy.

If you still haven't seen them, check out the link here:

I've also gone back to learning video game creation. It's something that I really enjoyed as a kid, but never pursued, and it's amazing seeing all the tools now widely available.
I got hooked on Game Maker Studio back in 2013, and I'm already rusty. So this year, I've been having fun going through a couple more tutorials.
Let me know if you want to see a sample of one of the finished tutorial games!

I was also able to complete a re-creation of Dungeons & Dragons' Keep on the Shadowfell, using RPG Maker VX Ace! Basing much of the game on playing sessions I ran back when I was teaching at Sheridan. Unfortunately, I can't release it to the public as it was made with liberal use of copyright materials/media. So it's going to have to stay a personal project. Sorry all.

Speaking of games... Development continues on my table-top card game.
Mechanically, I'd say it's pretty much done, and I'm hoping to start drawing up art in January.

In case you're wondering; no, I won't be publishing the game through Kickstarter. It would be logistically impossible for me to handle publication and distribution by myself. Hopefully, I'll be able to show it to a few publishers at gaming conventions next year, and find someone to pick it up.

In the meantime, I'm still waiting on a couple other developments, but I guess I'll just have to see what 2016 brings.

Until then, here's wishing everyone a happy holidays and all the best in the new year!
Posted by Apollo Okamura No comments: