So all of my art for Robotech: Expeditionary Force Marines has been approved, but the book's been delayed until probably late Q4. Until then, I'll wet your appetite with my finished Cyclone-Invid illustration. Alas, the other piece with the Alpha will have to wait until later. 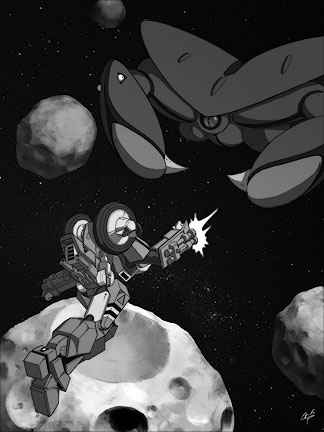 Also, for any Robotech fans out there that might have missed it, Harmony Gold Productions is looking to crowd-fund a brand new Robotech animated series based on the late Carl Macek's last project during his time at Harmony Gold, called Robotech Academy!

For more information, check out their Kickstarter! As of this post, they've got just about a week to go (campaign ends August 8th) and they look like they could use quite a bit more backers to get funded. So if you're a die-hard fan, I'd definitely head on over to be part of the production and get in on some cool rewards!

UPDATE (August 2nd): With less than 40% of their goal funded, and only six days left in their campaign, Harmony Gold has decided to cancel the Robotech Academy kickstarter, while they explore other options of bringing Robotech Academy to production.